The reputation of Nestlé suffered immensely in recent years for various reasons. With the aim to improve their reputation, Nestlé  launched a PR-campaign in Germany with the hashtag #FragNestle (#AskNestle). The consumers could ask any question they are interested in. Through the Twitter campaign the company hoped for positive feedback and support for their ''Fight against Child labour''. 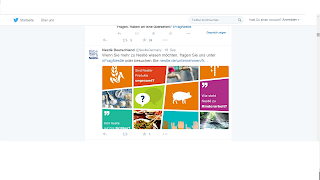 However, contradicting the expectations of Nestlé, the questions were mainly negative and very critical. #AskNestlé developed into a  real shitstorm. For example, people were asking questions like ''Why does Nestlé  hates the rain forest?'' or ''Why does Nestlé  think that water is not a common good and why you do have to take it away from the ones who don't have enough of it?''. 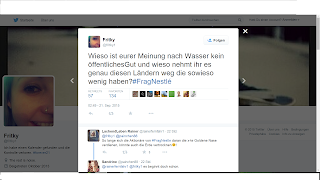 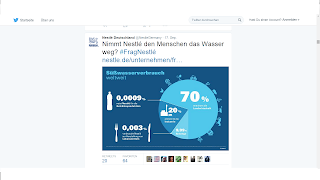 Nestlé tried to engage in the conversations e.g. through showing charts about their progress in the fight against child labour and demonstrating that they actually use only a tiny percentage of worldwide freshwater resources. Unfortunately, their engagement in the conversations made it worse, as users complained that Nestlé  was only using charts and references made by themselves which was ''not credible'' and made them look ''like liars''. One user summarized the campaign and the reactions towards it with the following words: ''In the end, regardless what you say or do, no one believes you. Pathetic.''

Later, the Head of Corporate Communications Nestlé Germany, Hartmut Gahmann, stated that they were expecting ''criticism and also malice'' but the aim of #AskNestlé was to show transparency and to answer justified questions directly. 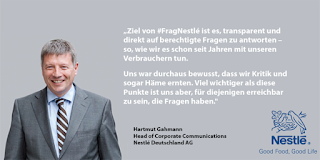 -by Sarah Kubiak -
Posted by Pierre Bourdieu does PR at 7:47 AM